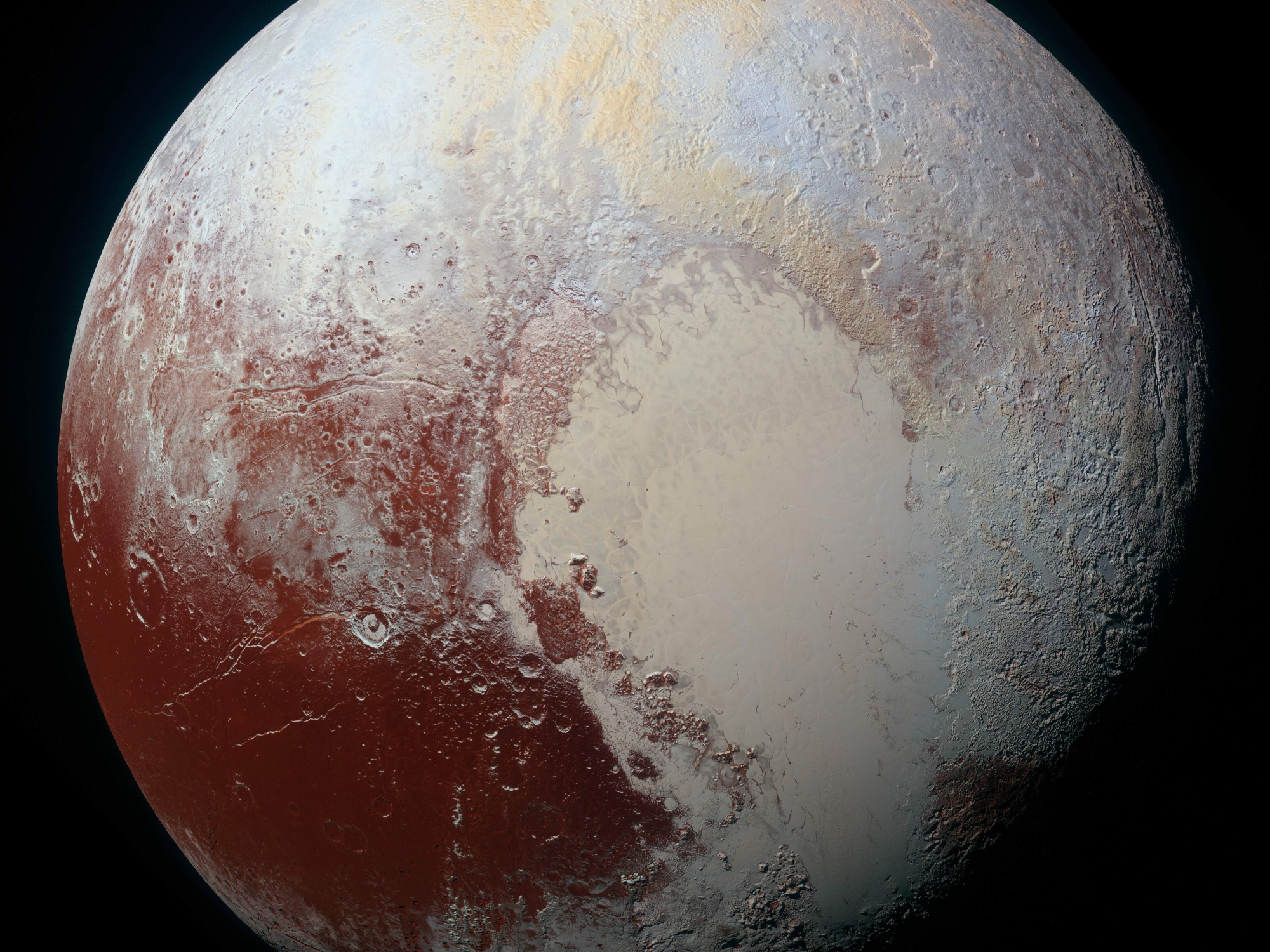 Following its record-setting flyby of Pluto, the New Horizons space probe is heading further out in our solar system.

The troves of data from the craft made it back to researchers in the Fall of 2014, and the team will set its sights on ancient icy objects far beyond the reach of Neptune’s orbit through the mission’s anticipated 2020 life expectancy.

The extraordinary exploration effort—which launched in 2006—helped team scientists examine Pluto’s atmosphere, topography, geology and moons. Team members were floored by the discovery of the tiny world’s veracious geological activity, coupled with possible evidence of a subsurface ocean after the flyby two years ago.

“It’s still geologically active on a massive scale 4.5 billion years after its birth,” said New Horizons Principal Investigator Alan Stern. “That’s a huge scientific headline. It upends our geophysical understanding of small planets. Seeing that Pluto’s geological diversity is so high that it rivals Earth and Mars is stunning. We haven’t seen an object this complex all the way across billions of miles of space in the dozens of bodies we’ve studied orbiting the giant planets on their own.”

The mission was able to “sniff” Pluto’s atmosphere to understand its composition, while imaging the dynamic surface.

“I remember the next day after our initial approach we were getting images that were 10 times more detailed than the full-disk view,” said New Horizons veteran and deputy geology lead John Spencer.

From the range of stunning images of Pluto’s surface, the team was able to determine a portion of Pluto the size of Texas and Oklahoma showed evidence of intense ice convection. The discovery lends to the strong notion of it maintaining an internal heat source below the layers of various types of ices.

“It’s a completely new kind of geologic feature that we’ve never seen on this scale anywhere else in the solar system,” Stern said.

The exotic nature of Pluto even forced the team to hire glaciologists mid-mission to help study the tiny world’s surface.

“We expected to see craters, but beyond knowing there were light and dark regions, we had so little to go on,” Spencer said. “We could’ve never imagined what we found. It was mind blowing.”

The remarkable 500 mile wide glacier of sheer nitrogen added to the complexity of Pluto’s surface, coupled with the glacier’s vast network of crevasses of huge ice crystals similar to stalagmites in caves.

There’s a region where there are hills that have ridges with deep troths between them that might be made of methane, so the ridges may be hundreds of feet high, spaced a mile or so apart,” Spencer said. “They look really exotic.”

The team found ubiquitous haze layers, well organized over 500,000 feet into Pluto’s sky, and the rate at which the planet’s atmosphere is lost into space was found to be 1,000 times lower than expected.

The lower escape rate puts Pluto’s atmosphere in similar standing with our planets and Mars, shattering decades-old predictions of the contrary.

“Pluto’s atmosphere is not like a comet on a planetary scale,” Stern said. “Many things—the blue sky included—showed us how Pluto reminds us of Earth.”

As the team surveyed its image cache, various images showed the best explanation for the dwarf planet’s geologic formations is likely an ocean deep below its surface.

The famous, 1,000 kilometer wide heart-shaped feature, seen in the first of New Horizons’ images, Sputnik Planitia, is suspiciously well aligned with Pluto’s tidal axis. The likelihood of one of the dwarf planet’s most beloved features randomly occurring there is around five percent, and the alignment suggests there is extra mass just below the surface, Stern said.

The weight of the iconic feature could be in its location due to massive amounts of ice that forced Pluto to roll over, leaving behind cracks and tension points in the crust. Evidence of the pileup throwing Pluto off kilter can be compared to a spinning top with a wad of chewing gum stuck to it, in a process called true polar wander.

“If you have an excess mass in one spot on the planet, it wants to go to the equator,” said James Keane with the University of Arizona’s Lunar and Planetary Laboratory. “Eventually, over millions of years, it will drag the whole planet over.”

Planets like to spin in ways to minimize energy, meaning planets like to reorient to place any extra mass closer to the equator, and any mass deficits nearest the objects’ poles.

If a giant volcano spawned in Chicago, the Earth would reorient to place Chicago closer to the equator. Pluto is effectively a spinning top lying on its side, with its poles seeing the most. Days on Pluto last around 154 hours. It takes Pluto 248 Earth years to complete its orbit.

“In addition to the convection of the nitrogen, there’s also the possibility that the ice shards—hundreds of kilometers of solid ice—which form the outer layer of Pluto, would also be convecting,” Spencer said. “Convection would be a way of driving geology on the surface, but would also be a way of removing heat. The fact we are seeing evidence for an ocean might mean the ice is not convecting, and that heat is getting through anyway, but it’s not doing it through convection, and it’s leaking out through some other way.”

This could also have entirely impacted Pluto’s orientation, with it being located directly opposite to Charon, the largest moon in the system.

“It’s a big, elliptical hole in the ground, so the extra weight must be hiding somewhere beneath the surface,” said Francis Nimmo, professor of Earth and planetary sciences at UC Santa Cruz. “An ocean is a natural way to get that.”

The incredible features on Sputnik Planitia were likely caused by an impact with a massive meteorite, blasting away vast amounts of Pluto’s icy crust. Any subsurface ocean would react to this by a large upwelling of water, pushing against the weakened ice crust.

Nimmo and others calculated whether the extra mass could be provided by just a deep crater filled with nitrogen, with no upwelling of an ocean. But calculations didn’t add up.

“We tried to think of other ways to get a positive gravity anomaly, and none of them look as likely as a subsurface ocean,” Nimmo said.

“Of all the worlds in the solar system, the fraction with water oceans is pretty small, so that puts Pluto in a very special category,” Stern added. “Anytime there’s the possibility for water to liquefy, it raises the specter of astrobiological potential. That’s pretty interesting for a small planet 3 billion miles from the sun, in a place where the surface is 400 degrees Fahrenheit below zero.

Pluto’s ocean scenario is relatively similar to what occurred on the Moon, where positive gravity anomalies were accurately measured for several large impact basins. Instead of an ocean, the Moon’s dense mantle material pushed back against the thin crust, with lava flooding the basins; adding extra mass. On Pluto these basins are filled with frozen nitrogen.

“It does give a pretty good argument for this pretty intriguing window into Pluto’s interior,” Spencer said.

Images from New Horizons show what appear to be massive nitrogen glaciers flowing out of mountainous terrain around Sputnik Planitia. Pluto’s possible ocean could maintain its liquid state with an antifreeze element, possibly ammonia. The slow refreezing of the ocean would put a stress on the icy shell, causing fractures consistent with features seen from analyzed images.

Pluto’s ocean could also be a sign of its dynamic and fertile past.

“We see sort of stretch marks on Pluto that its crust has expanded and cracked,” Spencer said. “That’s what you might expect if an ocean freezes because the ice expands and pushes the exterior out and cracks it. That could make a nice story there; it’s something we will keep studying.”

“It upends our understanding of Pluto and these other objects as frozen snowballs,” Stern said.

Looking back on the extraordinary encounter with Pluto, Stern said he could only describe Pluto as a wonderland.

Team scientists are preparing for upcoming 2019 encounters with ancient objects, and the mission is transitioning into the Kuiper Belt Extended mission, which is funded by NASA through 2021. The troves of data gleamed from the flyby prove Pluto deserves a reunion orbiter mission.

“From its atmosphere to its surface geology to its satellite system, to the possibility that it has an ocean on the inside and that it’s geologically alive after 4.5 billion years,” Stern said. “It’s truly so complex and we are bewildered. Pluto cries out for the same second stage of exploration similar to how we’ve explored the Saturn or Jupiter systems.”

Dr. Alan Stern is the principal investigator of the New Horizons Mission to Pluto and the chief scientist at Moon Express. He also serves as NASA’s Associate Administrator for the Science Mission Directorate, before which he served as the Southwest Research Institute’s Space and Science Engineering Division.

Dr. John Spencer has been involved with the New Horizons Mission since 1993. As the mission progressed, he acted as the deputy leader of the geology team, and was also in charge of ensuring where the spacecraft was heading during the flyby. Spencer is also an Institute Scientist with the Southwest Research Institute’s Department of Space Studies in Boulder, Colorado.

Dr. Francis Nimmo helped publish a key paper on new findings related to Pluto’s possible ocean. UA student James Keane helped publish another paper in the same issue of Nature that argues for reorientation and points to fractures on Pluto.