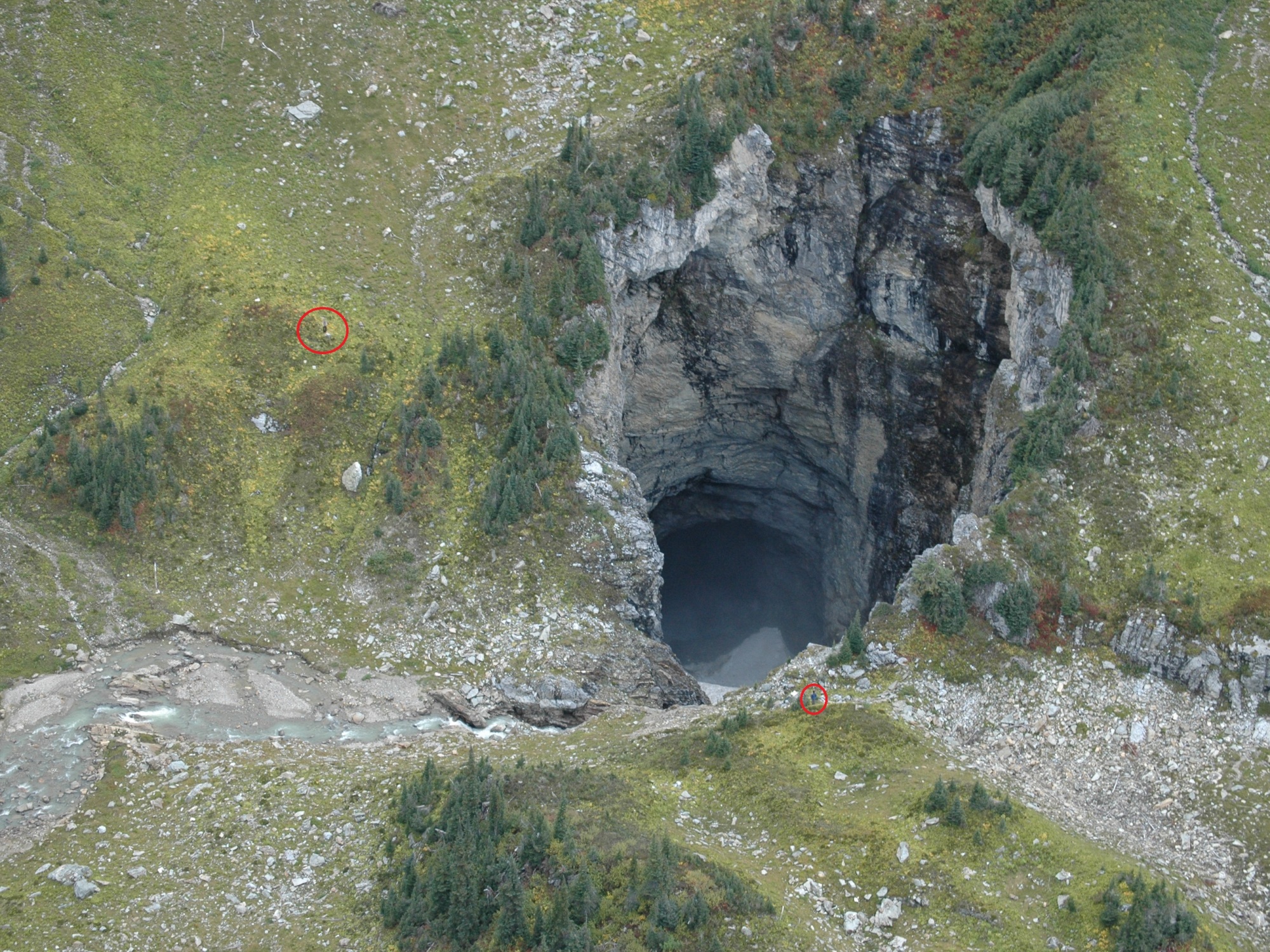 “You looked at this thing and you  knew it was going to go some place good.”

Those are the words of a Royal Canadian Geological Society fellow on the inaugural expedition to what may be a new chapter in North American cave exploration with the discovery of a massive cave found deep in Wells Gray Provincial Park.

The cave appeared untouched and unexplored prior to the September 2018 trek to its mouth, a call into the void – as if our planet was crying out, lamenting her still-extreme remoteness.

The first trip was undertaken by geologist Dr. Catherine Hickson, president of Tuya Terra Geo Corp, who contacted retired Canadian researcher John Pollack and the pair reviewed images of the area and its geology – warranting the first journey to the natural wonder. With Hickson and Pollack were helicopter pilot Ken Lancour and experienced caver Lee Hollis and BC Park’s Supervisor Tod Haughton.

Once at the site, the group broke into teams with Hollis making a swift solo descent of the cave to the entrance waterfall and setting a couple of rebelays and reached a depth of roughly 80 m (262 ft). While Hickson took early geology findings, Pollack made a 3D-rendered survey of the entrance pit from ground points and 140 photos of the cave taken from the helicopter. The site is truly remote, no road access and only extremely strenuous access hiking leaving the area as part of untouched wilderness.

Hickson, who conducted her PhD on the young volcanoes found in the southern and central parts of Wells Gray Provincial Park over three decades earlier, told States of Life she was stunned by the find.

“I actually didn’t believe there could be a cave there,” Hickson said. From a geological perspective, you need to have thick (greater than 100 m) of limestone. The marble in the area is thinner (a maximum of 50 m) and highly faulted and fractured. When I realized it had to be a cave, it was ‘holy cow, that is amazing!’ moment…It is very significant.”

“There were a number of explanations from myself and Lee, and they were somewhat profane, but we we were all pretty impressed,” Pollack said.

“It was a privilege to make the first known descent and my focus was purely on rigging, rockfall hazards and avoiding the powerful whitewater that could have dragged me into the abyss,” Hollis told Canadian Geographic, a skilled caver of 31 years across Europe, North America and Asia. “This is by far the largest and most impressive entrance pit I’ve ever encountered, and during my brief descent it showed no signs of closing down. There’s a lot of water thundering down there, so it will make for a sporting trip.”

The entrance to the cave is not a sinkhole or a blocked feature, but rather a wide-open shaft 100 m (328 ft) long by 60 m (196 ft) wide, with an overhang drop at its highest side exceeding 100 m, and a sloping line of sight into the pit of 180 m (590 ft) – an unheard of shaft length for Canada. While the depth of the cave, nicknamed the Sarlacc’s Pit, a terrifying creature from Star Wars, could not be measured due to mist from the entrance waterfall, the distance between the entrance and resurgence was estimated at 2.1 km (1.3 miles) with a vertical drop of 460 m (over 1,500 ft). The sci-fi nickname is in place from what Pollack said was a caving tradition: You find it, you label it. Provincial authorities have contacted First Nations tribes to determine if a pre-contact name or legend exists for the cave, he said. Hickson stressed the importance of realizing the nickname was a place holder ahead of an official naming.

The scope of the cave and the waterfall with its river running deep underground showed the power of this cave’s wall-to-wall water had washed down the entire shaft – the floor and walls exposed to its bedrock, wiping away any gravel, cobbles and boulders. Preliminary geology at the entrance found the cave is marble strata inter-bedded with garnet-mica schist.

“You’re looking at three or four bath tubs of water per second at low flow,” Pollack said. “High flow times in June and July you’re probably looking at a couple of dump truck loads of water per second. One of the reasons it’s so big is because it takes so much water and what happens is initially there was solution that formed this but the beds of marble are only 3 to 5 m thick but are steep. The water has hammered it all out.”

The immense power of the waterfall and its river made the descent for Hollis highly technical and frankly dangerous if not explored deliberately and with proper bolt rigging. To explore this wonder, Hollis and future cavers must stay dry at all times down the treacherous descent, Pollack said, noting that future teams would wear extreme exposure suits while on the way down.

Unlike caves explored by Pollack previously in Borneo and Laos, researchers will not be able to get into the water as done in tropical locales during kayak trips underground.

“This is high in the mountains and the stream is fed by snow melt and glaciers and even in the fall water temperatures will be around 4 degrees C (around 40 degrees F) and the water itself is going to be very dangerous because of that,” Pollack said.

After the site’s location was pinpointed by enthusiasts online, BC Parks issued an order effectively sealing off the area from would-be explorers and thrill seekers, making any unsanctioned visits finable up to $1 million per each day’s trespassing. Pollack and Hollis have filed a multi-year research permit with an anticipated second expedition this fall with substantial support from the Royal Canadian Geological Society, in conjunction with a geological mapping program led by Hickson. The helicopter bill alone costs $13,000 CAD, with Hollis assembling a six-person team of whom Pollack says, “won’t get in trouble down there” plus a geologist aiding Hickson with Pollack to serve as camp manager and assist with data collection and surveying.

But the find may just be the first of many monumental caving discoveries across Canada and greater North America.

“This find is unique, but it may not be the last of them given the size of Canada,” Pollack said. “Plus, who looks for big caves? You’re often looking for other things…There will be these finds. We weren’t figuring it would be quite so spectacular. Every so often these things come up and people ask if it was Photoshop, and I assure you it was not.”

The discovery begs us to question what lies unfound in still-vast expanses of wilderness.

“The discovery just shows that not everything in the world is known – there are still mysteries waiting to be discovered and explored,” Hickson said. “What a positive message for young people! This was a good news story – no one died, no one got sick, there was no political agenda – it was just a very neat thing to be part of.”

Dr. Catherine Hickson is a Canadian volcanologist, formerly with the Canadian Federal Government, Natural Resources Canada, and Geological Survey of Canada. Since 2014, she has been the Chief Operating Officer for Dajin Resources Corp. and President, Tuya Terra Geo Corp.

John Pollack, is a former senior research scientist for the BC gov’t in speleology and underwater archaeology. He has led mapping projects of some of the larges caves on the planet in Southeast Asia and has worked with archeologists in the Yukon, BC, Alaska, Jamaica and Vietnam.

Both spoke exclusively with States of Life earlier this month.