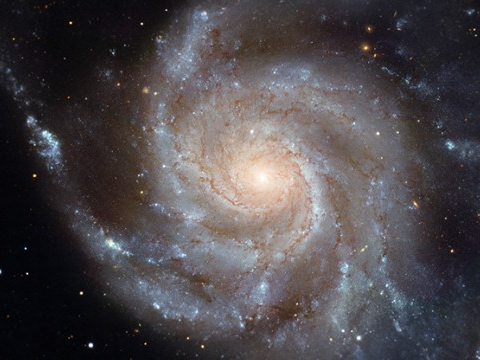 Researchers are learning exactly how far up to half of the matter in the Milky Way, even the iron in our blood, traveled on its intergalactic journey.

Carried away on galactic winds, nearly half of the atoms from our galaxy were synthesized far beyond the Milky Way, propelled along by massive explosions from dying stars.

Considerable amounts of key building blocks formed new stars as matter settled into its new galactic home, while heavier elements created by stars were dispatched on colossal journeys across galaxies—leading to the formation of life as we know it.

“This study reminds us that we are by no means the ‘center’ of the universe and that our origins are rather much less local than we previously thought,” said Daniel Angles-Alcazar, a postdoctoral fellow in Northwestern’s astrophysics center. “This gives as a sense of how the material around us may be connected to distant objects in the sky.”

Angles-Alcazar, who helped decipher the supercomputer simulations, said the results put a new lens on the contemporary immigration and globalist debate.

“We could consider ourselves extragalactic immigrants,” Angles-Alcazar said. “I think this is an interesting new twist to the concept, (we just have) to look back in time far enough.”

The simulations let researchers see how galaxies evolved on a billion-year scale. They learned stars exploding in smaller galaxies caused atoms to be carried into neighboring galaxies. On average, our galaxy can absorb a Sun’s worth of extragalactic dust annually, he added.

“Galaxies act both as ejection places and also as focal points that attract material back due to gravity, Angles-Alcazar said. “We used a large number of simulations that required the equivalent of several million hours of computing time.”

The galactic winds observed in the simulations could possibly travel 1 million light years before joining a new galaxy.

Previous studies underestimated the galactic winds, with the new study grasping their true potential. Angles-Alcazar said the findings were “significant” and boosted the belief only 10 percent of all matter came from outside the Milky Way to nearly 50 percent.

“It’s surprising to find that galaxies can exchange a lot of material via galactic winds, such that this intergalactic transfer of material represents a major contributor to galaxy growth,” Angles-Alcazar said.