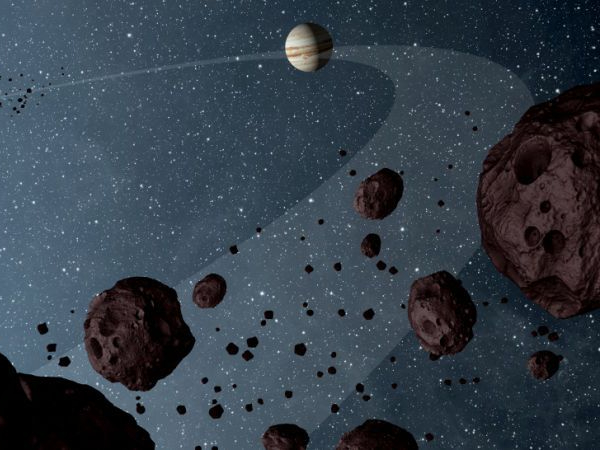 NASA is set to explore the earliest eras in the history of our solar system, after selecting two mission finalists early last year.

Lucy is planned to visit Jupiter’s mysterious Trojan asteroids, while Psyche will study a unique metal asteroid; with tentative launch dates for each being October 2021 and October 2023, respectively.

“This is what Discovery Program missions are all about—boldly going to places we’ve never been to enable groundbreaking science,” said Thomas Zurbuchen, associate administrator for NASA’s Science Mission Directorate in Washington.

Lucy’s journey to a main belt asteroid will take four years from launch before heading out to explore six Jupiter Trojan asteroids—space rocks trapped by Jupiter’s gravity in two swarms.

The Trojans are thought to be relics of an ancient age, and may have formed far past Jupiter’s current orbit.

“This is a unique opportunity,” said Harold Levison, principal investigator of the Lucy mission from the Southwest Research Institute in Boulder, Colorado. “Trojans are remnants of the primordial material that formed the outer planets, and they hold vital clues to deciphering the history of the solar system. Lucy, like the human fossil for which it is named, will revolutionize the understanding of our origins.”

Psyche will explore an asteroid around 130 miles in diameter, thought to be mostly metal—including iron and nickel—similar to Earth’s core. The asteroid could be the remnants of an early planet’s core; possibly as large as Mars that had lost its layers due to violent impacts billions of years ago.

The mission could boost understanding of how planets and other objects were separated into their layers—cores, mantles and crusts—early in each layer’s formation. Psyche will rendezvous with the metallic rock in 2030, following a gravity assist from Earth in 2024 and a Martian flyby the following year.

“These are true missions of discovery that integrate into NASA’s larger strategy of investigating how the solar system formed and evolved,” said NASA’s Planetary Science Director Jim Green. “We’ve explored terrestrial planets, gas giants, and a range of other bodies orbiting the sun. Lucy will observe primitive remnants from farther out in the solar system, while Psyche will directly observe the interior of a planetary body. These additional pieces of the puzzle will help us understand how the sun and its family of planets formed, changed over time, and became places where life could develop and be sustained – and what the future may hold.”

In addition to choosing the two missions, NASA will also extend funding for the Near Earth Object Camera (NEOCam) project for another year. The telescope is designed to study regions of space near Earth’s orbit, where potentially hazardous asteroids could be found.

The Discovery Program portfolio includes 12 previous selections; ranging from plans to study Mercury to exploring asteroids Vesta and Ceres and a Mars lander, set to be launched in spring 2018. Discovery Program class missions are relatively low-cost, with development capped at about $450 million.

All projects are managed for NASA’s Planetary Science Division by the Planetary Missions Program Office at Marshall Space Flight Center in Huntsville, Alabama.